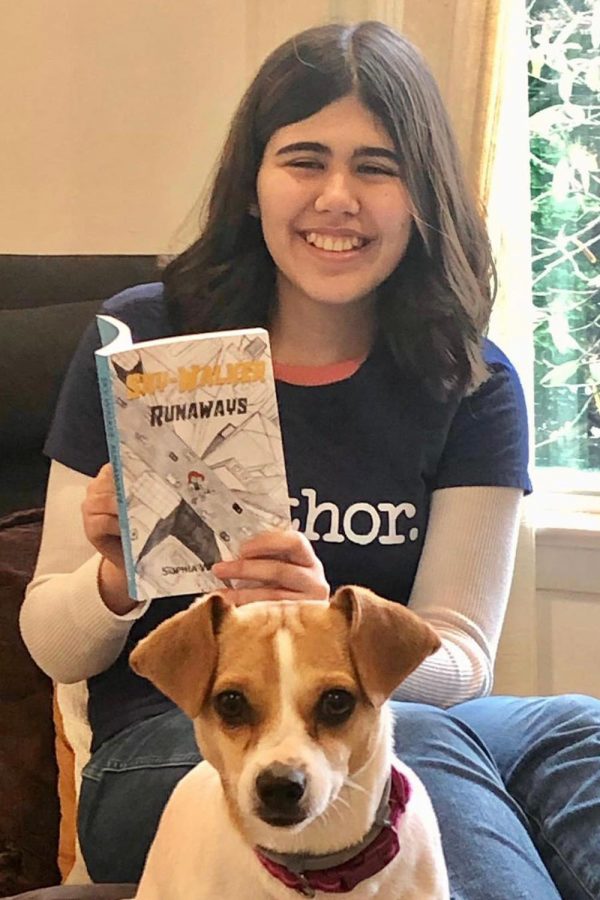 Sophia W. not only self-published her first novel, "Sky-Walker Runaways," she also designed the cover. The book is for sale on Amazon

When I learned that Sophia W., a fellow student at Longfellow, had written a novel, I was immediately intrigued. Of course, my first question for Sophia was, “Why did you start writing your novel?”

After pondering over her answer, she replied thoughtfully, “I loved reading books and writing in general, and I wanted to create something of my own. I felt that there was a story here that needed to be told.”

In her riveting new novel Sky-walker: Runaways, Sophia recounts a story of hidden prejudices, powerful beings, and the wrath of Asgard in a book about Norse mythology.

Sophia began writing her fantasy novel at the age of ten. As she played with the story idea, she started jotting things down in her notebooks and on Google Docs. She spent much of her free time preparing for school and hanging out with friends, but she always made sure to devote extra time (five hours) every week to develop her story. Once her draft was finished, she began revising, rewriting, and editing.

Getting someone else to read her story, whether a friend, mentor, or parent, was also extremely helpful.

“The writing itself is all my own,” she explained, “But my family read through the various drafts and gave me great suggestions.”

After writing the novel, Sophia self-published the book using Blurb, a self-publishing website and marketing company. As stated in statista.com, Blurb published just over 19,000 books in 2018, which was down from 20,600 in 2017. These books were all published by the same self-publishing program.

“It’s fairly easy,” she explained, “I made an account with the company, Blurb, through which I was able to use a computer program to design the physical layout of my book.”

According to Blurb.com, this platform offers an easy way to design, publish, and sell quality printed books and E-books.

“It took a while,” Sophia continued, “There were a lot of little details to figure out, such as creating a cover. But, after that, I was able to choose how I wanted my book to be sold, and it was published.”

Sophia’s novel was published in June 2020, three years after she started the project.

“It feels amazing to know that the story is out there; other people are finally reading what I wrote,” Sophia said, “It’s really incredible.”

Even at a young age, Sophia loved books, starting to read before kindergarten and beginning to show an interest in writing when she was in the first grade. She was only seven years old when she wrote her first short book, Kyle the Cat!

“I love the idea of building your own universe through writing. You get to tell the stories that are important to you,” Sophia said, “As for reading, books show me whole new worlds that I could never have imagined, and they teach me things I never would have learned otherwise.”

At the age of 13, Sophia has accomplished many memorable feats and will continue to do so, inspiring many people along the way.

When asked what she would say to the many young authors out there, she said, “I would tell them to keep writing as much as possible. You can create something amazing if you just stick with it; don’t worry about messing up.”