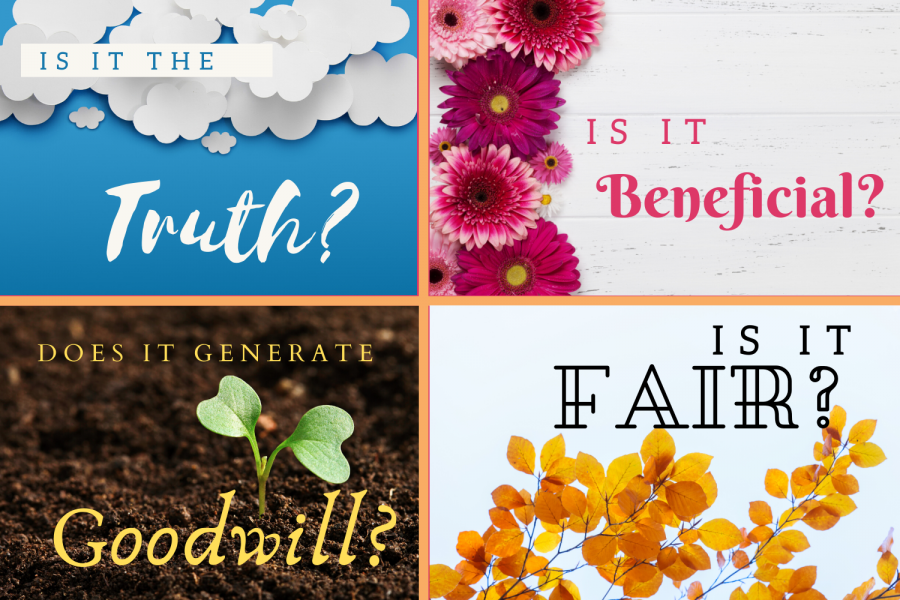 “In my opinion, one of the hardest things to do is to be honest with yourself. I struggle to admit when I am wrong to myself and others.”

These wise words are from the winning essay of the local Rotary Club chapter’s essay contest, written by Grace K. Grace’s essay went on to win second place at the District level.

A student of Mr. Wilson’s English Island, Grace carries on a long tradition of winners that emerge from that classroom. Mr. Wilson’s students have won the contest for the past six years, often going on to win or place at the District level.

The contest asks students to reflect on the famous Rotary 4-way test and think about how they can apply it in life to what they think, say, and do. Is it the truth? Is it fair to all concerned? Will it build goodwill and better friendships? Will it be beneficial to all concerned?

“I thought it was a good topic that I hadn’t written about yet, and I like challenges,” said Grace about her decision to participate in this voluntary contest.

One thing that made the contest challenging was Mr. Wilson’s requirement that students had to choose a quote from a book that helps them make good decisions. The quote was used as a hook to interest the judges in their essays.

“It’s a great way for them to build confidence in their writing, and most of them are pretty good writers, to begin with,” explained Mr. Wilson.

Grace chose a segment from the book Prisoner B- 3807, by Alan Gratz, about a Jewish boy detained in concentration camps during World War II, which she chose with the help of Longfellows librarians.

“The librarians actually were a huge part of this process, and I’m not sure that they know it. They put together a very detailed list of books that they thought would be fitting for this project, one of which is the book I chose.”

She also worked on her essay at the Writing Center, another project of Mr. Wilson’s, where her writing mentor was none other than last year’s essay winner.

Grace will receive a $100 prize for winning at the local branch and another $500 for second place District prize.

Despite the money, Grace maintains that the real prize was in the process. “I mean, it was kind of a benefit, but I liked the writing part of the essay contest more than the actual winning part.”