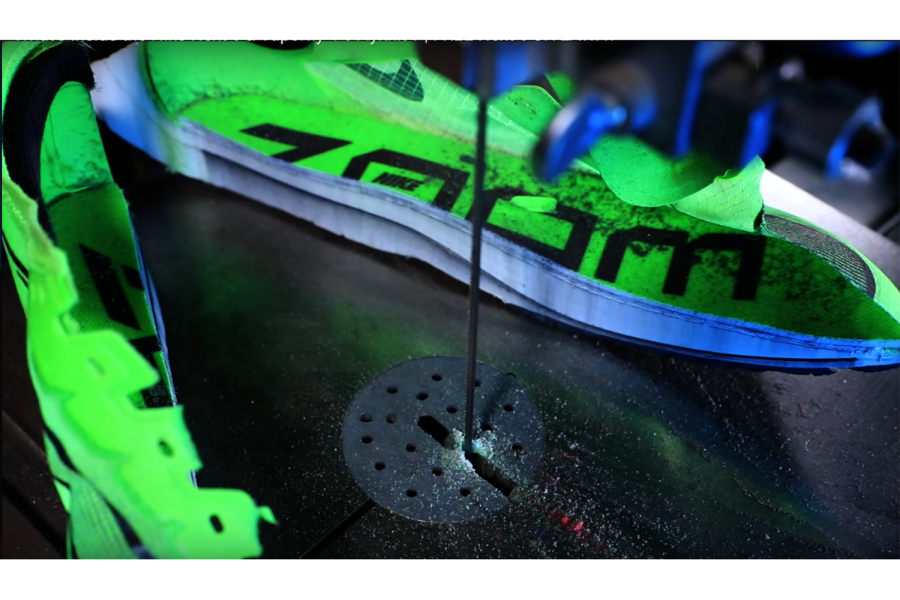 This pair of Nike Vaporfly's was cut in half to show the different layers of the shoe. You can see the foamy material (Pebax) that Nike calls ZoomX and the dark grey full-length carbon fiber plate. This is one of the first models of the Nike ZoomX Vaporfly NEXT.

There has been a lot of speculation around the running community recently on one shoe—the Nike Vaporfly 4%. This is for a specific reason—the shoe helped a runner do something once considered impossible, run a marathon in under 2 hours.

The New York Times reported the event.  On October 13, 2019, Eliud Kipochage crossed the finish line of a marathon set up by Nike in Vienna in 1 hour 59 mins and 40 seconds, beating his previous record of 2 hours 1 minutes and 39 seconds.

To do this, he needed to run at a pace of about 13.1 miles an hour. Still not impressed, according to the online resource Healthline,  the average human can run ‘12-15 mph for 15 minutes” now imagine that for 2 hours.

Although Kipochage beating the record is impressive, this new time is not the new official record.  The event was set up by Nike and was controlled in ways a typical marathon is not.   One variable in contention is the shoes he was wearing. This discussion was first brought up in an editorial in The Commentator, a student newspaper from Yeshiva University in NYC.

The Nike Vaporfly 4% is an unusual shoe with lots of components that contribute to its steep price and high performance.

“By combining two of our most innovative technologies, Nike Zoom X foam and vapor weave material, it’s the fastest shoe we’ve ever made,” their website boasts.

In January, World Athletics, the governing body of track and field events, updated their rules, effectively banning the shoe from competition, at least for the next year.  As reported on the Runners World website, the ban applies to any shoes that feature midsoles of 40 mm or larger.  In addition, any shoe worn in competition must have been available commonly to runners for at least four months before the event

The specific model of shoe that Kipochage wore featured more technology than the model available to everyday people. As a specialized prototype, that shoe would not be allowed.

Following the ban, Nike undertook a major redesign of the shoe, changing lots of the shoe’s components. Nike stopped development of the Vaporfly 4%, and they started to develop a second model of the shoe. The second model was a partial redesign named the Nike Vaporfly Next. This shoe is available to regular people but is very pricey listed on Nike’s website at 250 U.S dollars