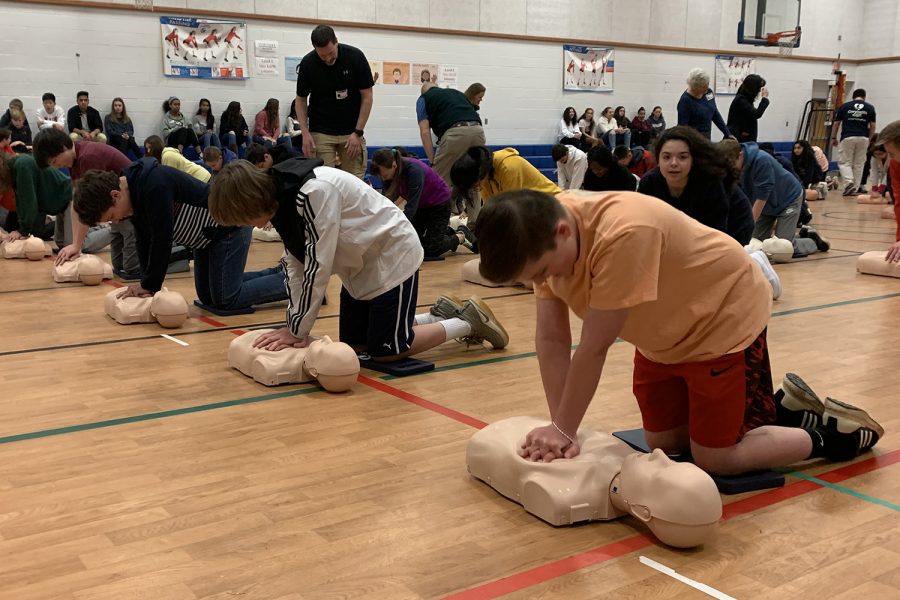 Every student in Longfellow was trained in the lifesaving technique of CPR this year.

The Longfellow gym was filled with CPR dummies. Students hovered over the dummies, pressing hard on their chests as if their lives depended on it. Teachers circulated, helping students on their form, all to a soundtrack of the BeeGees “Staying Alive,” which played in the background.

On February 13, a program called Gwyneth’s Gift came to Longfellow with the mission of teaching every student in the school how to perform CPR. The organizers of this project visit schools throughout the county over the course of the year to teach CPR to students.

It is crucial for people to know how to perform CPR and understand its importance.

“The key is that [if someone’s heart stops,] they receive CPR immediately because, as you learned today, the brain begins to die within 4-6 minutes,” explained Kristen Reed, one of the teachers from Gwyneth’s Gift. “The brain needs oxygen to survive, which is what CPR can do for a person; it circulates blood which gives out oxygen to the brain.”

The program’s chairman, Joel Griffin, taught Longfellow students the four steps to follow when performing CPR. The first step is to kneel next to the person’s side and pat their shoulder, asking them, “Hey hey, are you ok?”

If the person is unresponsive, check whether they are breathing and have someone call 911 immediately. The third step is for someone else to retrieve the AED (that’s the device that administers a shock) while the student starts on CPR.

To correctly perform CPR, hold both hands together, palms facing down, and locate the chest cavity below the rib cage. Then start pushing up and down from the shoulders until an EMT arrives.

After verbal instruction, students began to practice performing CPR on the dummies lying in front of them. Knowing the steps in one thing, but if you don’t practice, it’ll be harder to recall if you need it.

As the students were practicing, teachers circulated the gym, checking and helping students with their form and making sure they didn’t’ push down too light or too hard on the dummy’s chest.

Joel Griffin started this program after the loss of his daughter, Gwyneth Griffin, who passed away at her school after suffering from a cardiac arrest. No one knew how to perform CPR to help save her life. Though Mr. Griffin was able to revive her, it didn’t happen fast enough, and she died.

Gwyneth’s friends are the ones that came to us and said: “If we had known what to do, we would have liked to have helped her”. For this reason, it is important for us to inform schools and share as much information with you, the students, as possible.”

This was a life-changing event, and after his loss, Joel Griffin decided to make a difference by saving lives. He wanted to teach everyone, children, and adults how to perform CPR so that maybe one day, they could help save someone like Gwyneth.

It is his hope that if more people, youth as well as adults, know what to do, more lives can be saved.