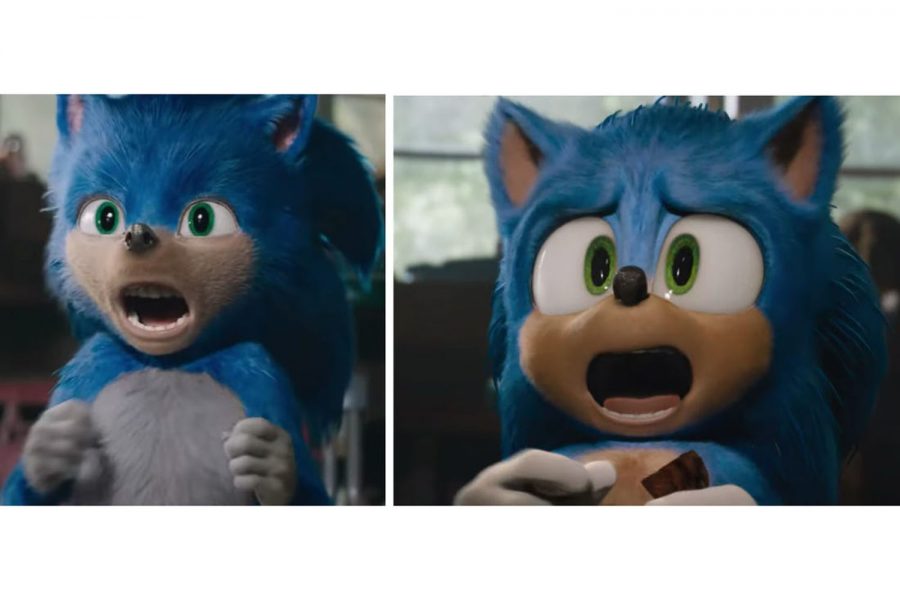 The side-by-side comparison of Sonic in the first and second trailer show the drastic changes Paramount has made to the trailer.

By Lisa H. and Marina L.
Fans were originally dismayed when Paramount released the first trailer for the upcoming Sonic the Hedgehog movie. After a miraculous redesign, however, it seems hype is back up for the February 14th release date.
When Paramount Pictures first announced a film adaptation of a popular video game character Sonic the Hedgehog in February 2018, fans were initially hyped for the promised November 2019 release date. However, after the first trailer was released on April 30th, 2019, fans reacted in shock and outrage.
“I’ve seen the first trailer when it came out, and it was horrifying,” stated Rachel N., a Team Phoenix student. “In the movie, Sonic’s eyes looked beadier than the Sonic I’ve known from video games. They also gave him these really weird legs. The worst difference was that the animators gave movie Sonic a really creepy set of human teeth. The original Sonic didn’t have teeth at all!”
Paramount eventually took notice and pushed back the release date to February 14th, 2020 to accommodate for a redesign for the main character Sonic.
After airing the second trailer, fans were very pleased with the redesign, saying it looks a lot more like Sega’s original design. Paramount dialed down the the disturbing human-like teeth, hiding them under his upper lip. The new design of Sonic doesn’t have as much of a defined bone structure, which adheres more to the spaghetti-like limbs of Sega’s original design.
“I think they pulled it off pretty well,” said Rachel. “From what I could see, Paramount has been able to get the facial features incredibly close to Sega’s original design. In the new trailer, Sonic has bigger eyes like the Sega design. The color of his fur is also a more vibrant blue and his stomach is tan instead of white.”
Perhaps the biggest difference are the eyes—Paramount’s new design features bigger, more cartoonish looking eyes instead of the beady eyes from the previous version. Sonic’s eyebrows are also more defined, allowing him to express more emotion than the previous version. Instead of weird furry fingers, Paramount gave Sonic a pair of gloves and a more classic set of shoes. Fans say that Paramount did a good job striking an overall balance between the realistic first version and Sega’s iconic, more classic design.
The plot of the upcoming movie shows Sonic trying to navigate his way through life on Earth. He is always trying to keep himself entertained throughout the day. However, his unusual power signature instigates a government investigation. He befriends a human named Tom Wachowsi, a cop from the rural town of Green Hills, and they work together to prevent the evil Dr. Robotnik from capturing Sonic for his powers and using them for world domination.
“The redesign makes me more motivated to watch the movie and the plot looks extremely interesting from the trailer,” says Rachel, “I am curious about what will happen to Sonic and how he will beat Dr. Robotnik.”
The second version of Sonic was so visually superior to the first that it went viral, with thousands of fans using it as a meme to poke fun at controversial issues. The two versions of Sonic were being used as an analogy to compare two different things, usually one of which is evidently inferior to the other (e.g restaurant food vs. food at home). Thousands of memes spread over social media platforms such as Twitter, Facebook, and Instagram, many of which are still cycling around today. 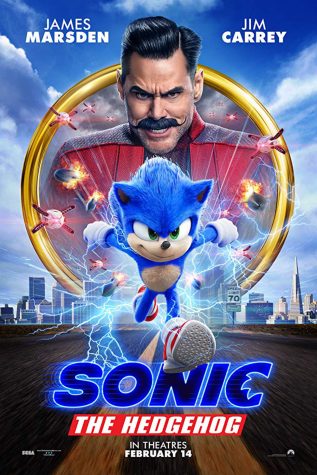 In fact, fans thought the new Sonic design was so much better compared to the last version that some conspiracy theories have popped up. Fans have compared the movie to Coca Cola’s New Coke failure, saying that Paramount made the first version bad on purpose to boost hype for the second version. Twitter user d’angelo wallace claims in a post, “They could have purposely messed up the first Sonic design in the first trailer in order to generate massive outrage and press coverage surrounding what is most likely going to be a run-of-the-mill video game movie, getting us all excited for when they ‘fixed it’.” Despite flat-out denial by Sonic movie artists, many still continue to speculate.