The Longfellow Lead • May 25, 2021 • https://lmslongfellowlead.com/1336/clubs-and-classes/longfellow-model-un-team-shatters-records-for-groundbreaking-year-in-face-of-quarantine-challenges/ 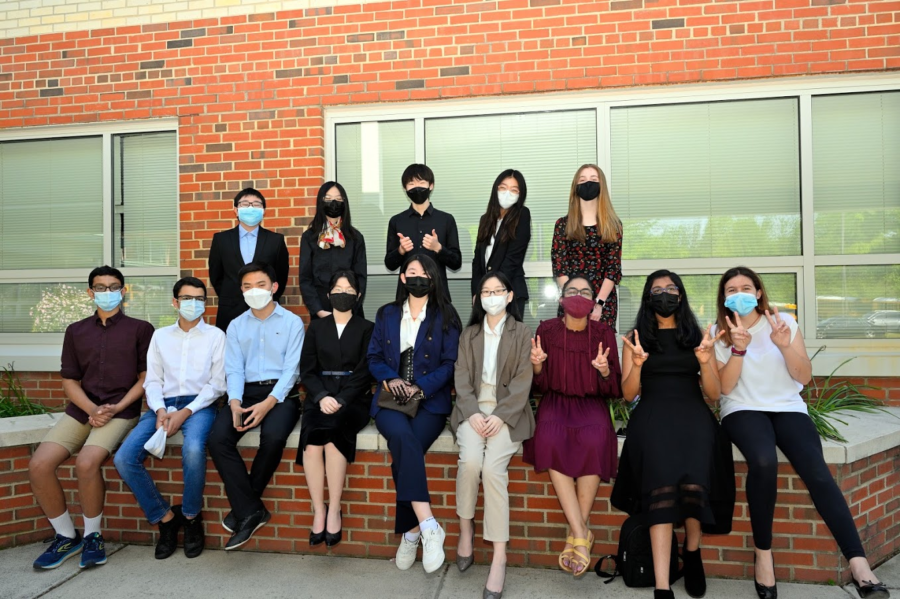 The model U.N., in a rare in person meeting, showed up ready for business and dressed to impress.

For most, the words “public speech” prompt a thick sense of dread.

Not for Longfellow’s Model UN team, however. Longfellow’s very own conference recently took place on April 17th, attended by six different countries and various states. The star-studded team is making waves in the “MUN” world, regardless of the onslaught of quarantine-related challenges thrown at their feet.

“What is Model UN? MUN, also known as Model United Nations, is a mock simulation of the United Nations,” stated Longfellow MUN Secretary-General Emily M. “Delegates represent countries and or people and lead as their role to collaborate with others in conferences.”

It isn’t just life skills, either. “Since I began Model UN, I’ve amassed so much knowledge in international relations, global funding policy, and diplomacy. I’ve learned to effectively expound upon topics in formal discussion and express the viewpoints of my delegation,” recalls  Zakareya.

Recently, Longfellow MUN members organized their very own international conference: LFMUNC I. There were a multitude of late nights and lots of hard work involved in the planning, but the team’s dedication to their motto, “Inspire. Aspire. Lead.” would prevail. After two months of laboriously writing background guides, organizing registrations, contacting schools, and communicating with guest speakers, LFMUNC I finally hit the stage on April 17th.

To call it a success would be an understatement. Students attended the event digitally across six different countries and numerous states. The conference’s site received over 14k views (as proven by Google Analytics). The members’ efforts earned Longfellow Middle School’s LFMUNC I the title of the largest middle-school-led MUN conference in the greater DC area (displayed prominently on the website).

“[Longfellow] is the current holder of the most awards this season, [and] we do wish to promulgate our ideas and concepts to other schools in the MUN community, to emphasize growth, diplomacy, and leadership,” said” Under-Secretary General Megan Z.

However, MUN isn’t all position papers and stiff handshakes. The team rallies behind their fabulous, self-elected mascot: “Toga Monke” (pronounced Monkey). It is, as Under-Secretary Megan Zhang puts it, “the spirit of our club mascot and savior whom we pray to for good luck before conferences, quite literally a monkey wearing a toga.” They have even gleefully dubbed the club newspaper in Toga Monke’s name, affectionately (and officially) named The Toga Monke Times.

“The Toga Monke Times began after our team collectively realized the need for a consistent source of information on local Model UN. We reached out to other regional schools and informed them of our new operation, which we deemed The Toga Monke Times,” explained Zakareya. Zakareya also designed the newspaper and club website. “In the paper, we cover local conferences, analyses of Model UN and UN-related policy, as well as numerous other features.”

MUN is open to everyone at any time. Even the quietest individuals can find their voice.

“MUN is great in a way that it doesn’t force anyone to speak — it allows all participants to have the time to spectate and learn,” Chief of Staff Victoria Z. confirmed. “Even to the most shy speakers, I find that MUN gives them the confidence to take initiatives and lead.”

For example, conferences are completely optional and committees within are chosen by the delegate, so members can sign up (for an easier committee) whenever they feel ready. In addition, many roles present the opportunity for students to work in pairs. Delegates may find it easier to speak up with a friend at their side. It is this lack of pressure that sets Model UN aside from other after-school clubs. “MUN is a club of a lot of firsts,” Victoria adds.” So speak up.”

“I’ve found that everyone’s MUN experience is very different. I, personally, was able to break out of my shell through MUN conferences. [MUN] allows for your speaking skills and confidence level to grow, whether it is monumental in a single sitting or gradually over multiple conferences.”

Even without the opportunity to meet up in person, Longfellow’s MUN team has broken barriers for a thriving virtual year. From hosting their own hit conference to meticulously crafting their own club paper, the team, who have won Best Middle School four times this year, welcomes every student with a toga and open arms.

“I cannot express my utmost gratitude to Longfellow MUN. We transformed this club into a family and made each moment into memories I will cherish forever. For everyone considering joining MUN, I urge you to do so. To all the current members of MUN, I hope you realize what a gift you have been given,” esteemed delegate Neha C. says, smiling.” There is nothing in this world that I would rather be a part of.”