The Longfellow Lead • May 25, 2021 • https://lmslongfellowlead.com/1311/entertainment/chloe-zhao-breaks-barriers-for-asian-women-in-filmmaking-industry/ 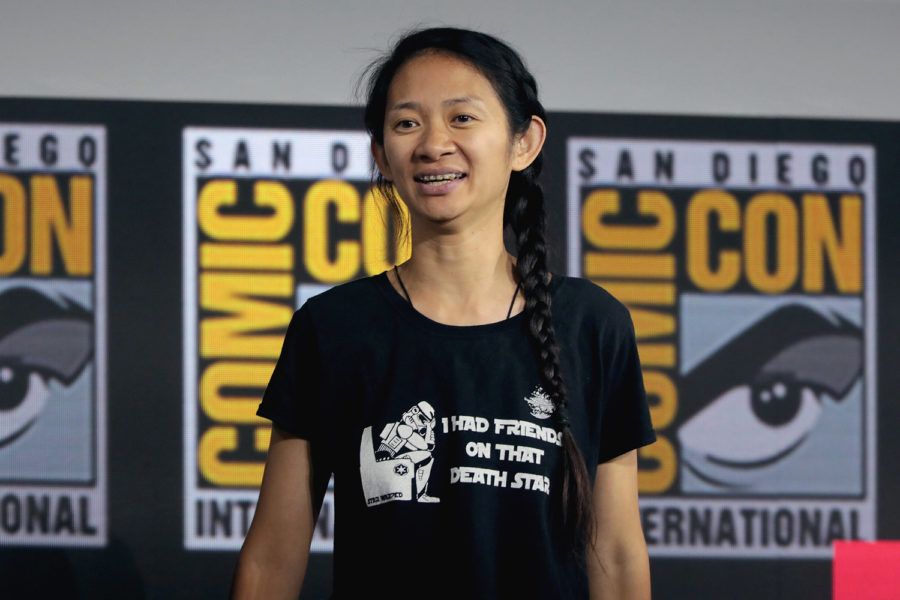 Chloe Zhao talking at the Comic Con in San Diego, California in 2019 about her upcoming film "Eternals." "Eternals" is Zhao’s first time working with Marvel, a very well known movie company, and after her success at the Oscars, many people are excitedly waiting for what could be her next big film.

Filmmaker Chloe Zhao didn’t get to the top all at once. But her small victories, such as getting into a great art college and making award-winning short films, led to bigger and bigger wins. Finally, she became the first Asian filmmaker to win a Golden Globe, and now she holds the same honor for winning an Academy Award.

“Since I am a student, I’m still dreaming big, and I don’t know how or where I’m going to work,” said Longfellow student Aarushi K., “but her success inspires me to think about how I’m going to be successful like that.”

Chloe Zhao was born in Beijing, moved to New York in 2010, and went to Tisch School of Arts in NYU. At School, she improved and grew her skill as a filmmaker, and in her early years, she released a short film called Daughters. This was the first major film in her career, and it won her multiple awards. After winning that victory, she continued developing her skills and releasing award-winning films, even after she graduated. One of her most memorable films is The Rider, which won many awards, but that film was when she began breaking barriers for female filmmakers.

The Rider is a Western film that Chloe Zhao directed, and it was a huge boost for her. Once it was released, it went wild. Zhao won the Art Cinema Award, was nominated for Best Director and Best Feature in the Independent Spirit Award, got her film released by Sony Pictures Classics and had The Rider honored as the best film of 2018 by the National Society of Film Critics. But what really made The Rider stand out was when Chloe Zhao won the Bonnie Award. The Bonnie award honors “the innovative vision and breakthrough work of female directors.” Zhao was the first director to win this award. This was when people started recognizing that she was breaking barriers for Asian females.

“I believe her victory shows the importance of perseverance, how important that character trait becomes in our own everyday lives. You know, she held onto the belief in herself, in her work, and in her dreams, and they paid off. I think she’s a role model for our women, especially our young female Asian women who can look to her success and hopefully follow their dreams, too,” said history teacher Mrs. Layton.

Nomadland was groundbreaking for Chloe Zhao not only because it first broke barriers with her being the first Asian female to win a Golden Globe Award, but because Nomadland was nominated for the Oscars in 6 different categories. She herself got nominated for four categories, along with her fellow film crew members. On top of that, Chloe Zhao actually won an Oscar in two categories, Best Director and Best Picture, and the main actress in Nomadland won an Oscar for best actress (in a leading role).

“As a student, it just makes me think about how much I have to go. I mean, Chloe Zhao went to the Tisch School of Arts in NYU, and that’s a very big goal for anyone trying to go into that industry, and they are all students that are applying there. So, as a student, I try to think about how much work it’s going to take to be successful like that,” said Aarushi.

With Zhao filming the new Marvel movie Eternals and winning an Oscar, we are very excited and looking forward to her future films and success.